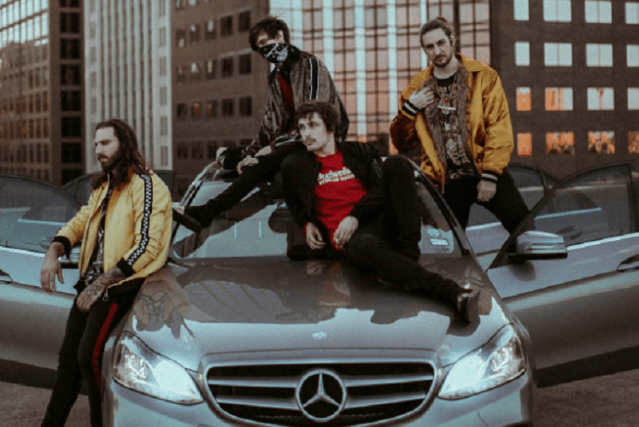 Polyphia is not only the biggest, but also the best metal band in the world. No other act has managed to marry a masterful command of melody with hip hop rhythms and dark and sinister tones in such an enticing way - and they've done so without the crutch of sing-along vocals. In challenging the generally accepted constant that dark and technical music has to be atonal and undanceable, the four members of Polyphiahave done their part to advance the world of instrumental rock in a manner that has seldom been matched in the history of the genre.

On the band's greatly anticipated new full-length, 'New Levels New Devils', Polyphia have taken yet another defiant leap forward. The virtuosic guitarwork that has defined Polyphia is still present, but the band made a conscious effort to replace distorted guitars and epic breakdowns with a soundscape of bass-heavy trap music. The elite cast of collaborators on 'New Levels New Devils' includes producers such as Y2K (Killy, Yung Bans) and Judge (Migos & Marshmello, blackbear, Young Thug). It also includes features from some of the best guitarists in the world - including Jason Richardson, Ichika, Mateus Asato, Yvette Young (of Covet) and Erick Hanseland Mario Camarena (both of CHON). Finally, the lone vocal feature comes courtesy of hip hop phenom - and long timePolyphia fan - Cuco, who has captivated tastemakers over the past year with his lyrical prowess and unique style.

'New Levels New Devils' will be released on October 12th via Equal Vision Records. It follows their 2017 EP, 'The Most Hated'. Upon its release, 'The Most Hated' reached #6 on the Billboard "Independent Label Release" charts and cracked the top ten for the "Current Rock" charts. It even showcased the band's crossover appeal by hitting #41 on the "Top 200" and #36 on the "Top Current Albums" charts across all genres. Still, one listen through 'New Levels New Devils'will leave the listener certain the band will crush those numbers this time around.