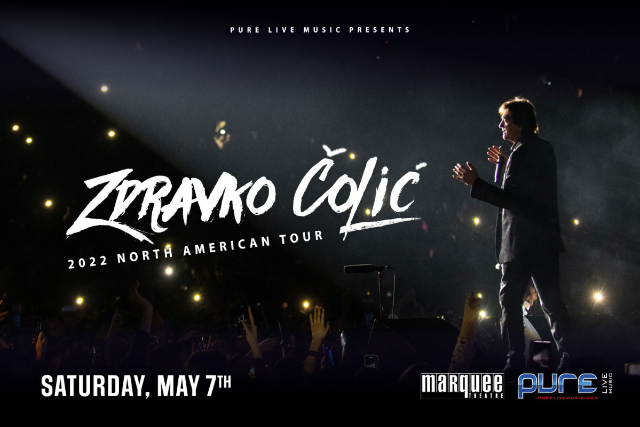 Often referred to as the Tom Jones of the Balkans, his ability to convey great energy through his music has netted Zdravko Colic a large fan base over  the last 40+  years.  It all started at his first festival appearance in 1972 in his hometown of Sarajevo, where he was quickly chosen to represent Yugoslavia at the 1973 Eurovision Song Contest in Luxembourg. Shortly after  that, he recorded the single Bling Blinge Bling which made it all the way to #2 on the BILLBOARD Hits of the world  charts. Colic then signed a deal  with record giant WEA(Warner Brothers/Atlantic/Electra), where he recorded several singles. He then went on to record his debut album, and the rest is history. Colic has  sold  millions  of albums throughout his 40+  year career.
He has gained popularity worldwide, touring all of Europe, Australia, US, & Canada multiple times, singing for the Balkan  Diaspora. He performs 30+ shows per year in the Balkans alone, many times sponsored by companies such as Coca Cola, Western Union, and Air Serbia, just  to name a few. He and his band are a skilled group of musicians who  mix powerful Balkan love songs with a modern Disco/pop/rock twist, a sound and style he has clearly conquered. Zdravko Colic definitely represents a unique style of music that continues to appeal to all generations. His ability to sell out a stadium such as the Marakana Stadium, in front of over  90k fans (2007) in Serbia, & The Pulska  Arena (2008) in Croatia for over  18k fans, certainly speaks for itself. More recently in December 2019, Colic sold out a record breaking 6 shows at Belgrade's Stark Arena, performing for a total of over  120,000 fans.  His Midwest/East Coast USA tour this past October 2019 had sold out shows in Atlanta, Washington DC, New York City, Chicago, & St. Louis. The same tour is now  being extended to the West Coast in April 2020. Cities on the tour include Toronto, Vancouver(sold out), Los Angeles & Phoenix!